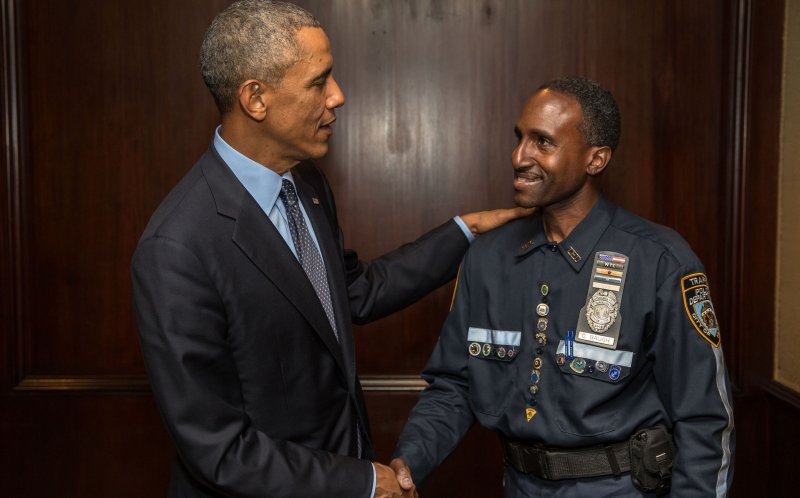 Clarence Baugh has been clearing the way for presidential motorcades for nearly three decades. Now, his hard work has been recognized by President Barack Obama. 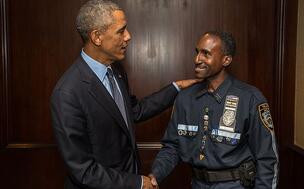 The 49-year-old Baugh is a part of the New York Police Department's "sweep team", which removes obstructing vehicles before the arrival of presidential motorcades. He's seen a lot during his 28-and-a-half years with the NYPD: on 9/11 he helped evacuate people from the North Tower before it collapsed, sending dust and debris cascading through the streets of a stunned New York City. More recently, Baugh helped move vehicles and transport people out of harm's way as Hurricane Sandy crashed into NYC.

But it's been his work with the sweep team that makes Baugh most proud. And yet, Baugh has yet to come face-to-face with a U.S. president. “He has served every president since the first Bush, and he never met one,” noted Baugh's superior officer.

Baugh was reportedly brought to the Waldorf Astoria Hotel, where Obama was staying. Despite finding himself on a high-intensity trip -- Obama was in town to discuss ISIS and the crisis in the Middle East with the United Nations -- Baughsaid "he seemed to be a happy person".

A White House photographer caught the moment as Obama shook Baugh's hand. It was a short meeting, notes Baugh, who returned to his tow truck just in time to help the NYPD sweep team as the presidential motorcade started its way towards a new destination.

For Baugh's colleagues, who all insist that Baugh is the nicest guy you'll ever meet, the honor was appropriate. “He’s a guy, you’d almost want to thank him if he towed your car,” an NYPD commander noted.

Given his rather confrontational position -- towing cars in one of the world's biggest and busiest cities -- you'd think Baugh would have a tougher, meaner demeanor. But Baugh says he keeps his cool by following a few simple principles.

“Be polite, be respectful,” he said. “Even though you’re going to have people who are rude to you, always stay polite, stay respectful.”