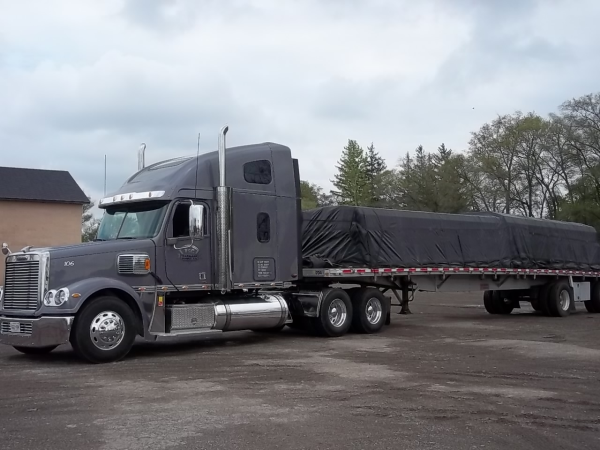 This is the first in a series of BigRoad customer stories about how trucking companies are utilizing some of the key features in BigRoad. We will introduce you to a handful of customers in the coming weeks and do periodic updates of how their life on the Big Road is changing with the help of our apps.

One of the first trucking firms that worked with BigRoad in developing our product is Trafalgar Supply based in Woodstock, Ont. Owner James Neely sees the potential to improve his operation by equipping his drivers with the BigRoad mobile app and having dispatchers use the web app to manage load assignments.
“BigRoad definitely has the ability to change the way we do business,” says Neely. “BigRoad products are something we utilize to a) keep our customers happier and b) keep our drivers rolling."

Neely says customers often call at 8 am and want to know the status of their loads right away. What Trafalgar Supply used to do is put the customer on hold and call the driver. Neely estimates that 6 out of 10 times the dispatcher gets the driver right away and he tells you where he is and when he will make the delivery. “That’s six out of ten and the customer’s happy. The other 4 times you get voicemail and you have to go back to customer and say I don’t know where your load is.” Neely says that can paint an unfavorable picture in the customer’s eyes.

“Now I can open up the BigRoad web app and find out the latest status. I can tell the customer exactly where the truck is that minute. That’s a top benefit for us.”

Another key feature for Trafalgar Supply in BigRoad is dispatching. Prior to BigRoad, they handled dispatch over the phone. The driver would call in, the dispatcher would read out the details, and the driver read it back to confirm. That process takes up to 7 minutes and can leave as many as 8 other calls on hold, according to Neely.

“Now with BigRoad we email the information through the app and the driver has the information right there on their phone. It’s also great for multitasking. You can be on the phone with the customer and be typing a message to the driver at the same time.”

Right now, BigRoad for Drivers has been rolled out to all 9 of Trafalgar's owned units on the road (16 owner operators bring the fleet to 25). Neely’s goal is to roll it out across the entire fleet over the next several months and evangelize the benefits to its stable of owner operators. They all have Android phones so it could be as simple as them going to the Android app store (Google Play) and loading the free app.

A key driver for embracing the apps for Trafalgar is cost savings on communications (mobile voice and email). Those savings can impact a man like Neely who freely admits to resisting change, especially when it comes to new tools and technology. It’s a sentiment very common in small to medium trucking operations.

“I do admit that I have to deal with some resistance to change personally. But as long as its pushing my business forward, then I’ll change,” says Neely.