Kenny Barstow of Barstow Transportation was one of the drivers awarded 2012 Truck Driver of the Year at the NASTC (National Association of Small Trucking Companies) conference in Nashville Nov 8-10.  Kenny has been driving for over 40 years and has exceeded 3 million accident free miles over that time. Well, after all these years on the road, this old dog is still teaching other drivers a few new tricks.

Kenny starting using electronic logs from BigRoad on an Android Tablet about 3 months ago when his nephew Billy Barstow was looking for a way to reduce the unnecessary 'form and manner' errors negatively affecting his fleet's CSA Fatigue Driving rating.  Billy knew that most of the form and manner errors could be avoided by going to electronic logs, but he didn't want to have to make a big capital investment or scare his drivers off with a complicated system. One of his other drivers was already using the free BigRoad e-log app on his Android phone and so he thought he should give it a try with Kenny. 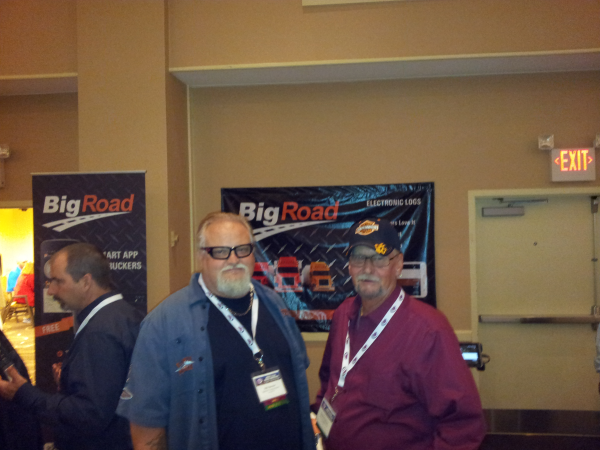 Although Kenny is not one to jump on anyone's bandwagon he thought he would give e-logs a try, if it could help him and Billy out.  He found that the elog form on BigRoad looks just like the paper log he's been using for years, but the calculations are made automatically and he doesn't have to worry about making a calculation error or forgetting some bit of information that may get him in trouble during a roadside audit.  Specifically he has heard of drivers getting dinged with a fine for forgetting to 'draw up the line' from line 4 to line 3 when they leave the truck stop, for example.  This is eliminated with BigRoad.

Kenny also likes that he can edit the logs just like on paper and that his logs are automatically submitted once he approves them while he is on the road, along with the trip sheets that he sends in with the camera on the tablet at the same time. This allows him and dispatch to be on the same page and working together as a team, as opposed to dispatch working on a 'guesstimate' of his available hours and location.

At the NASTC conference in Nashville Kenny was awarded Driver of the Year by John Ratzenberger of 'Cheers' fame.  John signed a picture for Kenny and rightfully called him a 'Legend'.  Truer words cannot be said.

Too often the motoring public forgets that >99% of truck drivers are hard working, honest, safe drivers who are always interested in getting better.  Their livelihood and that of their loved ones depend on it.

I got to know Kenny at the NASTC conference and I truly respect his dedication and willingness to try something new. After 3 million miles on the road this 'old dog' (no disrespect, Kenny) is teaching us all some new tricks.