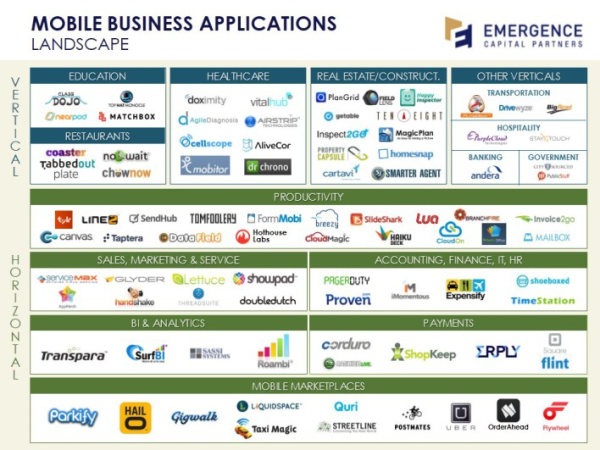 BigRoad made an appearance May 11th on gigaom.com! We were mentioned in an article written by Kevin Spain, a guest contributor who is a partner at Emergence Capital. So if you have a minute, check out the article "Welcome to the new (and fast-growing) ecosystem of mobile business apps."

In short, Spain's article discusses how, in the not so distant future, mobile apps will offer innovative new capabilities and business models, and, inevitably, change the models currently used. Spain compares the increase in popularity of mobile apps to the emergence of SaaS (Software as a Service) and how it has become a dominant force in enterprise software. The following diagram depicts Emergence's view of the mobile business app landscape (which they came up with from talking with over 100 early stage companies).

Can you spot BigRoad?

As explained in the article, "vertical apps are defined by their singular focus on industries that have a substantial cohort of non-desk workers," while "looking at horizontal apps, most start-ups emerge in three sub-sectors: productivity; mobile marketplaces; and sales, marketing and services. A defining characteristic of the companies in the productivity space is their focus on leveraging the native integration of email, desk and calendar in mobile devices."

After reading this article, I really began to think about how the business world has changed so dramatically in the past fifteen years or so. Can you even remember the days when business didn't rely on smartphones? It was only in 1999 when Blackberry released its first device, followed by the iPhone in 2007, and finally Android in 2008. The development of smartphone technology has truly caused a paradigm shift (not to abuse the term) to occur in the business world. The phrase "there's an app for that" does really hold strength thanks to the need for simplicity and organization.

The mobile app that has been developed by BigRoad has gained its popularity because it has simplified life for over 56,000 people (and counting). Our developers identified a reoccurring problem in one of the continent's major industries and found a way to solve it, and placed the solution at consumers' fingertips - literally. BigRoad, like many of the mobile app companies out there today, is beginning to change the way people think about i.e. driver logs and the methods in which people maintain them. Solving life's problems with the touch of a finger...who would have ever thought...

But, where there are ups there must be downs (thanks Newton for solidifying that reality). With the emergence of new business mobile apps and all their glory comes new and unchartered challenges. In Spain's opinion, there are two major challenges:

2. "The question of whether to native-build mobile business apps or to use a browser-based approach."

Click HERE for the full article by Kevin Spain. Thank you Kevin for mentioning us in your article.

If you would like to learn more about the BigRoad app and how we can help you, feel free to contact us and request a live web demo.