#Trucking vs #SocialMedia - Truckers are you Tweeting? 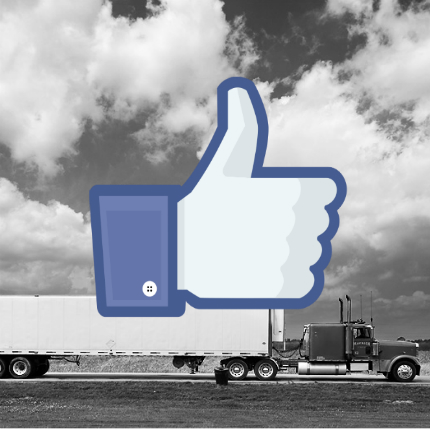 Social media has taken the world by storm in the past couple of years and the transportation industry has definitely latched on to the new form of communication.

According to one of the stats in the article below “650,000 people on Twitter identify as truck drivers or truckers.” Some would think that Twitter and other social media outlets such as Facebook, Instagram and Pinterest are only suited for fashion and tech industries, but really that is not the case. Social media has been put to major use by the transportation industry. Mass and efficient communication is one of the major benefits from signing in. News travels quickly through channels such as Twitter. Take, for example, the Pilot Flying J fiasco. Much of the news and fact sharing took place on twitter. Hashtags such as #flyingJ #Pilot and #lawsuit would lead you through the "trending maze" and land you at tweets regarding the issue.

Another point brought up in the article is that "it gives people an opportunity to post their concerns, pros, cons, and it allows [the] organization to listen and respond. It’s a two-way street.” In a way, social media has leveled the playing ground, and allows truckers/drivers to voice their opinions regarding issues and situations that are directly affecting them not only as individuals, but also as a community.

Trucking Gets Serious About Social Media

P.A.M. Transport Inc. of Tontitown had about 20 positions featured in its most updated online jobs postings for non-drivers.

Scan the alphabetized listing and you’ll see pretty much what you would expect from a company that provides nationwide trucking and transportation services for the manufacturing, retail and automotive industries. Help wanted included accounts payable/receivable positions, a dispatcher, HR help, lead inspectors, maintenance coordinators and all the usual jobs you’d associate with a company of this scope and size.

Get down into the “S” category, though, and you might be surprised at what you find. Here’s a sampling of the 208-word job description for the newly created social media specialist:

But Pinterest, YouTube and those other social media spaces are also great marketing and communication tools. And as anybody who has ever worked to recruit and retain drivers will tell you, marketing and communication are critical to success. (Side note: You won’t always read about driver recruiting and retention in this column, but finding and keeping qualified employees is something that comes up a lot in conversations with folks in this industry.)

Finding new and creative ways to reach current and future employees is the ultimate goal here. Like any other company, P.A.M. sees the value in delivering a message where its employees are spending their time and getting their information.

The frequency of drivers picking up printed industry materials in a truck stop is declining. But Facebook use? That’s on the rise for truckers as it is for people all over the world.

Consider that Facebook announced earlier this year its mobile audience had eclipsed desktop users for the first time in its history. A record 680 million users log on via smartphone or tablet each month and those numbers will continue to climb.

No driver-specific totals are available for Facebook or mobile use, but you’d have to think in an industry where many employees are on the road for sometimes weeks at a time, there’s an audience there.

Dan Kee, assistant vice president of driver resources for P.A.M., points to a statistic he picked up at a recent seminar in Nashville, Tenn. Kee said participants were told that about “650,000 people on Twitter identify as truck drivers or truckers.”

P.A.M. isn’t alone in working to establish an online community for its employees. Noticing peers use these tools successfully and seeing the success a third-party recruiting firm has had with social media convinced P.A.M. leadership a social media position was a must.

Maverick Transportation, which is headquartered in North Little Rock, has 2,430 “likes” on its Facebook page. Content featured is a mix of driver-submitted photos from the road, company videos, kudos to the company’s top drivers and even a happy birthday post for CEO Steve Williams.

Distributing information is only part of what an online presence means. Perhaps most importantly, it provides an avenue to listen to employees.

These are great tools for conversation, something that is needed with so many employees working outside of P.A.M.’s corporate headquarters.

“Social media sometimes gets thought of as only the way to blast a message. That’s half of it,” HR manager Tyler Majors said. “One of the biggest things for us in driver recruitment and retention is listening. What this does, it gives people an opportunity to post their concerns, pros, cons, and it allows us as an organization to listen and respond. It’s a two-way street.”

(In case you are wondering, no salary range has been set for P.A.M.’s social media specialist. The company promises it will be “competitive.”)