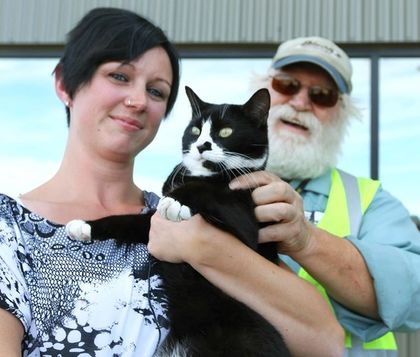 The Graves family never thought they'd see their cat Oreo again after the feline got lost in a forest near White River, Ontario. But thanks to a pair of kind truckers, Oreo has now been reunited with her people. 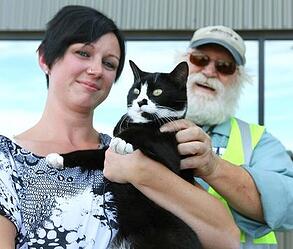 In early September the Graves family moved from Nova Scotia to Alberta. Along the way they stopped in White River, which is where little Oreo -- a black-and-white five-year-old cat -- slipped her leash and took off into the trees nearby. After searching for hours the Graves gave up hope, leaving teary-eyed for Red Deer.

Upon arriving in their new home the Graves immediately began a campaign to find little Oreo. Kelly Graves contacted the White River township, asking community leaders to keep an eye out for the cat. Shockingly, a local stumbled upon Oreo and they alerted an elated Graves family. The only question: how would the cat get back to its owners so many miles away?

Stepping up to the challenge were two truckers: Brian McHale and Bruce Kaplar, commercial vehicle operators for Bison Transport. McHale volunteered to take Oreo from White River to Winnipeg, where Bison Transport is based. Bruce Kaplar was responsible for the second leg of the journey.

“They asked me if I want[ed] to [drive to] Calgary and I said sure. They said ‘only thing is you have a passenger,’” Kaplar told the Calgary Sun.

“I never hauled a cat before,” Kaplar admitted. “To help somebody out, I’m okay with it ... it’s well worthwhile. The cat’s home where she belongs and with the people she belongs to.”

Kelly Graves was stunned when she heard that Oreo was coming home, just weeks after she was lost in the dense forest surrounding White River. “I thought I’d never see her again," Graves said. "I figured she was gone, but I still never gave up."

Doug Romanuk, vice-president of sales and operations at Bison Transport, says he wasn't surprised his drivers were willing to offer help. "We take great pride in our culture of care [and] we’re very proud of our two drivers Brian and Bruce,” Romanuk said.

Oreo made it home on Friday -- precisely sixteen days after she was lost. Kelly's boyfriend, David Morrison, says he's still stunned by the kindness shown by the people of White River and Bison Transport.