Transport Canada announced yesterday that Canada will follow the US mandate and require the use of ELDs for tracking driver hours. This decision was made after years of review and found that it will improve safety, eliminate fraud, and significantly reduce paperwork.

Although minimal details have been released, Transport Canada stated they will align with the FMCSA’s December 2017 timeline. It is unknown if the same criteria will be used for what is considered an ELD or if there will similar exemptions, or any at all. 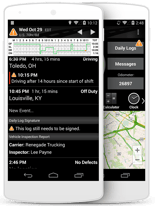 Most drivers use paper logs which can be time consuming and opens up drivers to multiple types of errors such as form and manner violations. An electronic log (or eLog) is an electronic version of a paper log. Drivers record their drive time using an app, such as BigRoad, and it automates the calculations, drawings, and reports. It is not engine-connected and can be edited.

An ELD or AOBRD is engine-connected and does not require the driver to input in the drive time - it is automatically populated from the engine. This ensures accurate logs that are compliant. An example of an AOBRD is BigRoad’s DashLink. The difference between an ELD and AOBRD is that the specifications of an ELD are outlined by the FMCSA, such as in-device GPS.

So Why The Change to ELDs? 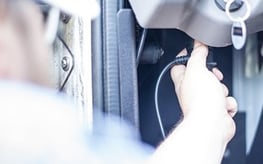 Replacing paper logs to an electronic log is nothing new. It’s been in talks for over 10 years and finally after the ELD Mandate passed in the US, Canada is now looking to make the transition. Based on initial feedback, it looks like the Canadian market is more open to the change.

The main reason for the change is safety. Engine-connected logs will ensure there is no fraud or tampering with logs. Fudging drive time numbers can be like a white lie - no one gets hurt, but there have been many instances where people have actually been hurt. Although there aren’t any stats yet for Canada, the FMCSA estimates that by using ELDs, about 26 lives will be saved and 562 injuries prevented.

Paper logs have been used since the 1930s and is the second largest paper filing, with taxes being the first. According to the FMCSA, the transition to electronic logs will save about $1 billion and based on these numbers, will certainly save millions in Canada.

With all the advances in technology, paper logs are also outdated. To put it in perspective, when was the last time someone used a bank passbook to update their financials? But just with every industry, there are advances in technology that makes things easier. BigRoad gets messages daily from drivers - none being letters. We get messages via email and our social media channels including FaceBook and Twitter which allows us to respond quickly.

The Canadian Trucking Alliance agrees: “Our industry shares its workplace with the public more than any of the other mode of transportation, yet the enforcement community is relying upon an archaic, outdated way of monitoring and enforcing what is arguably the most important safety rule,” stated David Bradley, the President of CTA.

ELDs are much easier and allow drivers a worry-free and hands-free approach to their driver logs.

By adopting DashLink now, carriers and drivers are investing in BigRoad's AOBRD 395.15 compliant device and we guarantee full ELD compliance, with no additional charge when we release our ELD compliant hardware, before December 17.

No more purchasing decisions ever again. One provider, one solution.