Jack Darden has been driving for years. Based in Richmond, Virginia, he was sick of paper logs and wanted to find a better electronic solution. What he didn’t realize initially, was that not only would he be changing how he logged for himself, but helping out his fellow drivers and improving the fleet management for his supervisor and the company.

Paper logs were just not working for Jack. They were always a pain for him especially since he had multiple stops in his route. Every time he stopped, he had to fill in the paperwork and it just became too time consuming.

He initially came across BigRoad in an online search for electronic logs. Although his trucking job at the time didn’t require him to keep logs, he used BigRoad’s eLogs to keep track of his hours to ensure his paycheque was accurate.

Since the first time he used BigRoad, he’s been hooked. Three years later, Jack is still singing BigRoad’s praises to all the drivers he meets - even going as far as sharing it with the management of his current company. According to Jack, “Everything is so much simpler with BigRoad!”

After switching jobs, he is now working as a driver for The Peggs Company, which is a shopping cart reconditioner based in California. In this position, he is required to keep logs and track his hours of service. He is based in the East Coast branch and drives a day cab, pulling 53 footers. Jack’s typical day consists of unloading all the new carts, loading the pick ups and having multiple stops ranging from 10 minutes to two hours.

The company used paper logs, but Jack just continued to use the BigRoad eLogs. At the end of the week, he submitted his logs electronically to his supervisor and informed him on how he’s switched to eLogs from paper. His supervisor was so impressed with these logs that he told Jack, “Do them like this from now on!” 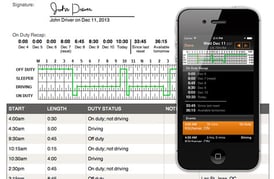 With a fleet of nearly 40 drivers nationwide, Jack started showing the BigRoad eLog app to his fellow drivers. Some of them had problems with hours of service or form and matter errors, but once they started using BigRoad, all of those problems disappeared. Another benefit was that it didn’t require any additional hardware. Most of the trucks are outfitted with in-cab tablets and they can easily launch the BigRoad app.

So many of the drivers took on BigRoad at the East Coast branch that they upgraded to the fleet side last year. The supervisor has fully embraced this transition. As Jack says, “[Upgrading] to the fleet side, my supervisor can check on me and send me to any added pickups.” And currently, they are working towards it being used company-wide.

Another great feature for him is that BigRoad eLogs can be used in any truck. Sometimes Jack drives different vehicles, he doesn’t have to worry about hardware or switching anything between trucks. 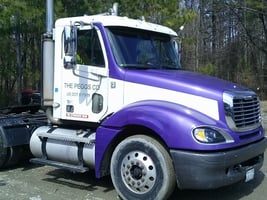 Even when it comes to inspections, Jack is confident in his logs. Recollecting some of his past inspections, Jack says, “I've been pulled in several times for inspections and have been clean for all. I do need to add a portable printer to my truck to make it easier to print out.”

But with the enhanced features of the app, he doesn’t need to do much printing at all except when required by officers. “Speaking of printing, I don't even print logs at the end of the week since we can access a year’s worth through fleet side.”

The reason that Jack and his fellow drivers have so quickly embraced and adopted BigRoad is that it makes their life easier. Sometimes new technologies can be daunting, but Jack stated, “I’m happy to embrace new technology especially if it makes things easier for me. I only use BigRoad’s eLogs and never paper.”

Jack knows that he can rely on BigRoad eLogs to keep track of his hours of service and is compliant: “BigRoad does a great job of keeping up with me and for me. I love it - I’m ready for the mandate!”

Get BigRoad eLogs working for you and your fleet.