Last week, BigRoad hosted a webinar all about the motorcoach industry and was joined by two motorcoach experts: Kristine Meinhardt and Randy Howell. The webinar focused on motorcoach operations, the experts' experiences, and what’s coming up with ELD.

If you missed the webinar, check out the recording... 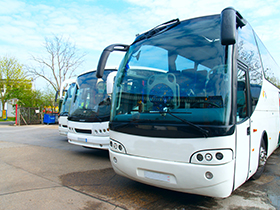 Kristine owns her own motorcoach business, MidWestFunBus.com, in Milwaukee WI, and has years of experience from both the drivers-side and as an owner-operator. She is also a CDL Examiner at the WCTC and for the State.

Randy Howell is also an experienced motorcoach driver and the President and Founder of Professional Motorcoach Drivers Association of North America (PMDA). He is based in Wisconsin and his association caters to motorcoach drivers and companies. PMDA is a non-profit, membership-driven association, which provides support for motorcoach, promotes driver safety as well as the need for training and education within the motorcoach industry.

How is Motorcoach Different? 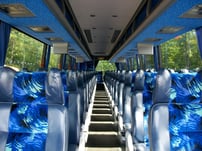 Passenger carrying is quite different from property carrying. A motorcoach driver has sometimes 50+ people behind them and is liable for the vehicle, the passengers and ensuring safety for both.

Trip planning, quick thinking, and people management is very important in this role and it’s not always an easy transition from another type of driver to motorcoach driver.

BigRoad has been servicing the motorcoach industry since the beginning. We have several motorcoach customers: big, small, companies, owner-operators, Canada and US.

BigRoad just wrapped up at the UMA Motorcoach Expo in Atlanta, GA and spoke with many interested drivers and companies.

By using BigRoad, motorcoach drivers have an easy way to track their hours of service and manage their documents in one central location. The paperwork can become overwhelming but by using BigRoad, additional paperwork is eliminated along with drawing lines and calculations.

Kristine Meinhardt uses BigRoad even when she’s driving locally and doesn’t need to maintain a logbook. “With BigRoad, it’s simple. It takes only a few minutes to fill in each day. I’ve used other systems before and BigRoad is the easiest and has everything you need. Don’t waste your time and use this for all your trips.”