It’s been a very busy month for the BigRoad team...and we’re only two weeks in! We’ve spent the first week of February travelling - meeting with prospects, customers, and attending a number of tradeshows including UMA EXPO 2016 and the Mid-West Truck & Trailer Show. 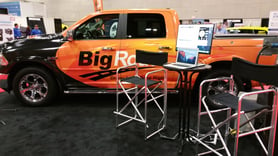 Our first stop was at the United Motorcoach Association (UMA) EXPO 2016. Terry Frey, CEO and Co-Founder of BigRoad, hopped in the BigRoad truck and drove over 1,000 miles to the Georgia World Congress Centre. Of course, he had to stop and get the truck detailed before dropping it off in our booth. Brock Tanner, Business Development Manager, was also onsite for the event.

Terry presented to a room full of attendees, as
part of a four-person panel discussion, on the importance of electronic logging devices (ELDs)
for motorcoach drivers. He reviewed the BigRoad Mobile App, the BigRoad Web App, and DashLink - our engine-connected logging solution. We had hundreds of people stop by our booth to ask questions about how the ELD mandate is going to impact the motorcoach industry, to learn more about BigRoad, and to get a demo of our solution suite. 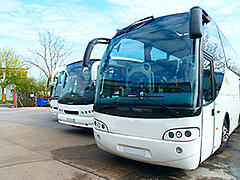 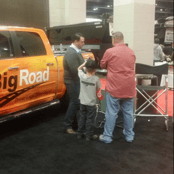 After the UMA EXPO, Brock met up with Marcia Burgess, Director of Channel and Customer Success at BigRoad. The pair hit the road and drove another 690 miles to Peoria, Illinois for the Mid-West Truck and Trailer Show hosted by the Mid-West Truckers Association. The ELD mandate was top-of-mind in Illinois with lots of people stopping by our booth to see how BigRoad can help them on their path to compliance.

Where Will We Be Next?
Interested in connecting with BigRoad? We’ve got a number of webinars coming up and will be attending events in Kentucky and Toronto. Check out our events page for more information.