On The Road Again - My Day Driving an Entertainment Coach 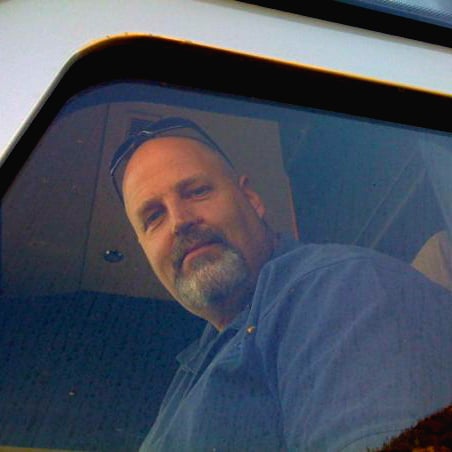 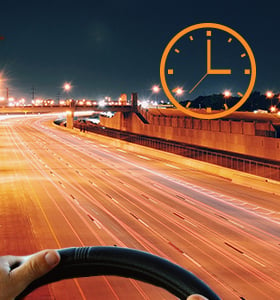 I have told you in previous posts how to get into the entertainment industry; now let me tell you what my typical day is like.

Each show has what is called a production "runner" that is responsible for just that... "running" around all day doing various things for the tour production team. This includes things like shopping for groceries for the buses and arranging pick-ups for gear that ends up missing; usually because it got left behind from the previous shows. Their final two runs for the day involve picking up the after show food for the crew, and after that’s dropped off, picking up us coach drivers from our hotel and bringing us back to the venue.

Once I’m back at the venue, I do the usual DOT things that I need to do. Starting with going back on the log changing to a "On duty not driving" status as I do my pre-trip inspection and paperwork. After that is out of the way, I move to the customer service side of the job. Normally I have trashcans to empty and probably some minor vacuuming that needs my attention. I may have grocery items that need to be put away, which is something I generally do in order to make sure nothing is laying around loose that can fall in transit.

When the show is finally loaded and the trucks have departed, the remaining crew showers and the buses are loaded as we depart for another city and the next show.

This is the time when the crew has a chance to eat, drink and be merry. They will at various times pop up front to the "jump seat" to smoke a cigarette, hang out with me, the driver, or have a quiet talk with the wife/GF in a quieter environment.

In the 20+ years I’ve been doing this, it’s a given that one of the folks that comes up front on the first night of the tour is up there to assess your skills and your attention to safety. They may seem like they are just up to hang out, but if they have never worked with you before, the conversation will ALWAYS include, "How long have you been doing this?" They will then go back and "report" to the others what they observed.

As we cruise through the night over the highways of North America, the party eventually winds down and the various crew or band guys (depending on which bus I‘m driving) find their way to their bunks and settle in for a peaceful night's sleep. 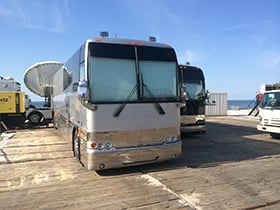 This is my peace and quiet time. All drivers are different, but I am not a CB guy or a radio station guy. Generally, the only time I have the CB on is when I am traveling in a group of buses. Even then, my use of the CB is limited to responding to something asked specifically of me. I also don't make a habit of listening to the radio, even though I have XM.

I am generally, "in the zone" when I drive and I simply watch the distance to destination click down on the GPS. Speaking of which, the only reason I have a GPS is for that reason... distance remaining. The beautiful thing about this business is that I’ve been going to the same venues for years and I no longer need a GPS to figure out how to actually get there.

At some point in the night, depending on distance, I will stop for fuel. I generally tend to stop for fuel after everyone has gone to bed, unless I have been asked specifically to stop beforehand. There are reasons for this:

Speaking of not being left behind, there is a traditional method that experienced guys use when exiting the bus without the driver seeing them, and that is to put something in the drivers seat. It is not uncommon to be at a fuel stop and once the pumps are pumping and I am working my way around the bus checking tires, opening the engine compartment to check belts and general over all conditions, that someone jumps off the bus and heads inside without me actually seeing them do so. It is in these cases, that leaving something in the drivers seat means the difference between making it back to your bunk or being left at a truck stop.

The fuel stop is also my opportunity to refill the fresh water holding tank of the bus, empty the sewage tank of the bus. I try to use Flying J's because they have a dump station on the RV island. Also I get rid of the after show food pizza boxes or Styrofoam containers that jam up the trash chute. It is also a chance for some ME TIME... as I grab a cup of coffee, a bathroom break and maybe a simple bite to eat.

Once the fuel stop is done, it is back out to navigating the highways.

Join me next week and I'll show you what the rest of my typical work day is like once we arrive at the arena.