Tell Us Your Story: David Schenfelt of West Chester, PA 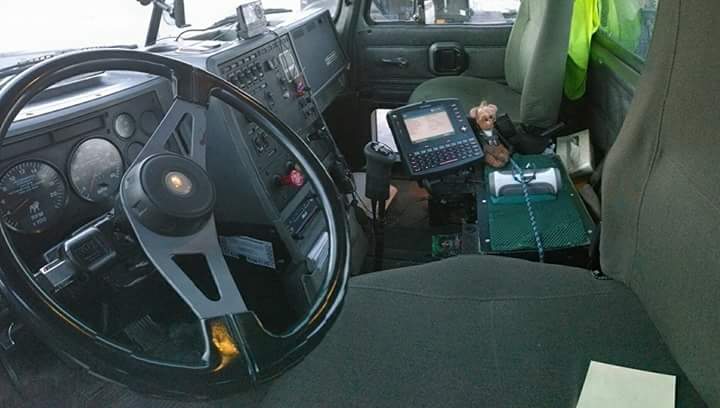 As a part of our ongoing Tell Us Your Story series from earlier this summer, we encourage our readers to submit their BigRoad experiences and how it has helped them in their day-to-day driving lives.

Earlier this summer, we received a submission from David Schenfelt of West Chester, PA, Local 384. He’s been driving package delivery since 1995 and moved on to tractor-trailers 15 years ago. Pictured above is his in-cab setup.

As a company driver for an international shipper, David uses the company’s internally-created, proprietary software and equipment to maintain his daily driving logs. While it fulfills the requirements by the company and the FMCSA, he wanted to find a convenient solution that he could use as a back-up to an often finicky system.

While on the road, this company-mandated system posed some interesting challenges - leading to incomplete or erroneous logs and putting David at risk during a potential inspection: “During a hardware or software upgrade, the program could glitch or the new in-cab computer would restart or [when trying to] back-up information to a thumb drive [it would] inevitably fail and lose all information,” stated David.

After finding BigRoad in an online search, he downloaded the electronic logging app and started to mirror his time card and driver log in the software. The BigRoad app created a quick, accurate and error-free backup of his hours of service information that he could provide to inspectors as well as keep for his own records.

According to David, the company software had its own limitations when it came to editing his logs and sharing the information when needed:  “Other than direct viewing from the in-cab terminal, I strongly suspect it is a limited-access process to have records sent from whatever server they are stored.”

Despite what one might think, David found it very easy to recreate his daily log. It only took a couple extra moments and editing was a cinch!  “It literally takes only a few extra seconds to keep my personal records in agreement with the company records; entering information is quick and easy. Corrections can always be made after a simple screen tap. Often, in the company software, this is not so. Once clicked, the error stays until management goes in and corrects the error.”

Not only is the editing simple in the BigRoad app, but a lot of the intuitive features help David update his records quickly - ensuring that his logs are accurate and up-to-date at all times.

BigRoad also aids in tracking on-duty/non-driving activity as well. Drivers often experience delays with traffic congestion or detention times which can greatly impact their pay. “The auto-start/stop feature [comes] in handy to register traffic delays. Such information is important when on a mileage-paid run, where some non-driving activity is submitted for extra pay. [It’s] a totally hands-free record [that] a driver does not have to remember to write down.”

Tracking time delays or detention information using paper logs is always subject to intense scrutiny and question but BigRoad electronic logs record exact time, GPS location along with the ability for drivers to make an electronic note detailing the reason for the delay. If and when an inspection occurs, all driver activity and supporting documentation will be accounted for in the electronic audit trail - preventing any further debate.  This level of accuracy isn’t available for David using his company’s software.

While David runs with the ‘official’ company logs, it’s the BigRoad app that gives him the biggest freedom:  the option to allow inspectors to view his logs via fax, remote print, email, or mobile device without needing to climb into the cab to print the old school way. “I would always leave it up to the inspector which log they prefer to view,” stated David, but it is apparent why he opts for using BigRoad as a back-up.

Keeping an additional log brings peace of mind for David - allowing him to quickly update his hours throughout the day. It only takes him a few moments to update using BigRoad. This way, if he’s having trouble with the company’s system, he can use BigRoad to update the company system at a more convenient time - typically when he is not on the clock or driving. If he experiences any company system issues, he always has a backup log that he can rely on.

There have been drivers in the past who stated that they’ve been “nailed” for having two logs because they weren’t able to explain the purpose for two. When you use a solution like BigRoad, it’s easy to show all the additional capabilities for drivers that give them full control of their logs and empower them to capture everything accurately in moments.

In David’s case, the company system he was using is time consuming, inconsistent and inflexible. He’s able to track on duty/non-driving time, show GPS information and make notes for any unusual situations. BigRoad offers him a back up to his company system - ensuring his logs are up-to-date and accurate.

Whether you use paper logs or another existing solution, try out BigRoad’s eLogs. It is an easy solution to easily record, maintain and share logs. It’s also free to download the app.