It’s that time of year - BigRoad has scoured the internet to give you our list of the top 10 cargo spills of 2017! You’re not supposed to cry over spilled milk, but no one ever said that you can’t laugh at spilled cargo! Here’s our list (in no specific order) of the funniest and weirdest things that were spilled in 2017. Disclaimer: No one was seriously injured in any of these spills.

Freedom Was Within Their Reach...
Or Claws

Thousands of pounds of lobster were spilled on Highway 103 outside of Port Mouton, Nova Scotia. It was reported that the driver swerved to avoid a deer. Reports indicated that people stopped along the roadway and began filling up bags with the discarded lobsters. Dinner in a pinch! Read the whole story here.

After taking a corner a little too quickly, a truck traveling in downtown Center City lost its load of watermelons! Some carriage horses stopped by the scene to help with the clean up! Many people stopped to eat the broken open watermelons as well.

A mysterious load of red candies were littered across a rural road in Wisconsin. Despite the candies missing the trademark “S”, passersby knew they were Skittles due to the distinct Skittle smell. When the cleanup crew arrived, they said that the candies actually helped to improve traction for motorists on the icy road. Did you know that rejected candy is actually fed to cows? These candies fell off a truck that was hauling candies to feed cattle as a source of cheap carbs...makes you think twice before reaching for those Skittles! Read more here.

I bet the driver of this truck was quoting Homer Simpson when this happened! With the high heat, a dump truck loaded with dough spilled its load, leaving large masses of dough on the road. State Trooper Brooke Bova took to twitter to share some pretty great puns about the sticky situation.

Anyone Up For a Game of Marbles?

38,000 pounds of marbles were spilled along I-465 outside of Indianapolis. The little glass balls were scattered across the road and into the embankment. Indiana State Police joked that they were looking for a large shop vac to help with clean-up! See the spill here.

Anyone Need Some Hair Gel?

It looked like a scene from Ghostbusters. 7,500 pounds of hagfish (aka slime eels), exported from South Korea, were spilled along Highway 101. By spilled, we mean they were thrown across the highway and scattered onto the vehicles of innocent drivers just trying to get to work. Hopefully these motorists had their windows up! You can watch a video of the accident here.

A truck carrying a load of whiskey tipped over on I-40 causing the load to spill into the ditch. Cheers to the “volunteers” that were eager to help clean up this mess!

It's Not Delivery, It's Pizza I Found On The Highway

A week after the whiskey spill, this happened! According to the Arkansas Department of Transportation (DOT), there were “lots of pizza fatalities” on the highway. The trucker’s trailer was ripped open after hitting the overpass, causing pizzas to fly across the road.

Getting a Little Tipsy

A transport truck carrying a load of Tito’s Vodka tipped over, ripping the roof of the trailer open. Boxes of vodka were dumped into the ditch and onto the road. Click here to see a video from the scene. 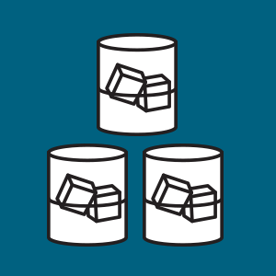 Talk About a Strong Drink

The door of an armored security truck popped open causing money to fly across the highway. Many motorists tried to alert the driver but he just kept driving. Police urged people to return any money they found. I guess ‘finders-keepers’ rules were not in effect! Watch the coverage from the incident here.

How Can BigRoad Help?

While we can't prevent crashes from happening, we can help make sure that you're putting safety first when you're behind the while. Download the BigRoad Mobile App to help track your hours-of-service (HOS) and improve your compliance.