Just When You Think You've Seen Everything

To quote Forrest Gump, “Life is like a box of chocolates, you never know what you’re going to get.” The same can be said for trucking, every day on the road is different. Just when you think you’ve seen it all, a truck carrying chips collides with a truck carrying beer to fulfill every snack lovers dreams!

If you’re like me, you’re getting sick of reading recaps of the “top 10 things” that happened in 2016. This is a recap...but we aren't talking about the normal things: the ELD mandate, new regulations, or hours-of-service (HOS) changes.

We’ve pulled together our list of the top weird trucking spills from 2016 (where no one got hurt of course). Check them out below.

Two trucks collided on I-95 in Brevard County, Florida in March. One of the trucks was carrying Busch beer. The other truck was filled with Frito-Lay products (chips). The crash caused cans of beer and chips to scatter across the highway. Unfortunately, no one brought any dip!

2. You Don't Make Friends with Salad...Dressing 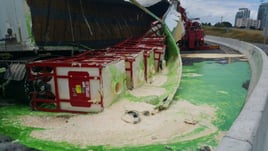 During the morning rush near Toronto, you're not going anywhere quickly on Highway 401. Things get even worse when a truck carrying vats mayonnaise and salad dressing rolled over. Neon green and white sludge coated
the highway leading to multi-hour traffic delays.

In early 2016, a sewage truck hauling porta-potties rolled on US-60 in Mesa, Arizona. The truck driver said he swerved to avoid a barrel on the highway. This caused the empty porta-potties to fall off the truck. Unfortunately, a large amount of “sewage” spilled across the lanes in the process!

The promotional team for the Deadpool movie did an awesome job with their publicity campaigns. From ads on Tinder to their own line of emojis, Deadpool was everywhere! People even thought this accident was just a big publicity stunt.

5. There's Something Fishy Going On 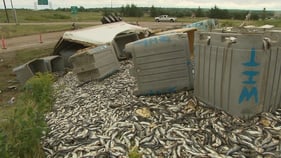 Fishing is big business in Atlantic Canada. With over $6 billion in fish and seafood exported annually, fish is regularly transported via trucks.

In New Brunswick, a truck rolled causing bins of fish to cover the highway. No injuries were reported and the cause of the accident is unknown. Seems like something fishy is going on here!

It’s a classic scene from a movie. Thousands of paper bills fall from the sky and some lucky people are there to catch them. Well, it actually happened in New Jersey last March!

An armoured truck dropped bags of $20 bills onto Route 46. Another truck then hit the bags causing them to explode and fly across the lanes. This caused a major traffic jam - I’d be stopping too!

We’re off to a good start with a weird accident already on the books for 2017. Earlier this week in Quebec, a truck carrying a load of muffins burst into flames.

The truck made contact with a guardrail causing the trailer to detach. The detached trailer then caught fire causing substantial damage to the nearby overpass.

Thankfully nobody got hurt as a result of the accidents we’ve covered above. But, accidents involving commercial motor vehicles (CMVs) can be pretty serious and often deadly. Many of these accidents could have been prevented if the driver completed their driver vehicle inspection report (DVIR) before hitting the road.

With BigRoad, you can complete a DVIR in just a few clicks. Focus on driving and not making national news. Download the free BigRoad Mobile App to get started today!